You are viewing the Staging version of this site. Login

The London 2012 Olympic Games were the GB Rowing Team’s most successful, not just of the modern era, but all time.

The team won a record nine medals after qualifying boats for 13 of the 14 events on home water at the Olympic rowing regatta which was held at Eton Dorney from July 28 to August 4, 2012.

Denmark
Medals:
One
One
One
Total:
Three
Rank by Total:
=4

The medal haul included four golds, two silvers and three bronzes with GB finishing as top rowing nation for the second successive Games and surpassing the eight medals won at the 1908 Olympic rowing regatta at Henley-on-Thames. 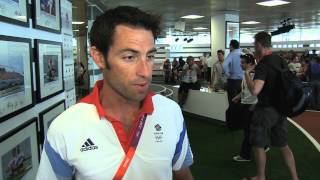 The lightweight men’s squad served up two silver medals in the double of Zac Purchase and Mark Hunter and four in the guise of brother Peter and Richard Chambers, Rob Williams and Chris Bartley.

Britain's rowers were out in force training today at the sport's Olympic competition venue at Eton-Dorney - just 48 hours before the first races take place in the 2012 Olympic Regatta.

Spectators came in their droves to Eton-Dorney from early today to watch the opening day of the Olympic Rowing Regatta.

"This is the Olympic Games, it's what every elite athlete trains so hard for and like all elite athletes we hate losing", that's how Mark Hunter summed up the motivation that he and Zac Purchase felt in the final quarter of their lightweight men's double scull heat today.

Britain made four starts at Eton-Dorney today and all four boats moved to the next round - three with relative ease, one with a big dose of drama en route.

The Team GB men's double scull and women's eight both progressed to Thursday's finals by finishing third and fourth today in their respective semi-final and repechage.

Helen Glover and Heather Stanning opened Team GB's gold medal count in the women's pair at Eton Dorney today and with that victory wrote themselves into the history books as Britain's first female Olympic gold medallists in the sport.

Brothers Richard and Peter Chambers with Rob Williams and Chris Bartley took silver today in the lightweight men's four in one of the Games' most exciting rowing races to date.

As the final two days of rowing begin at Eton-Dorney David Tanner, GB Rowing Team Performance Director, has expressed his pride in a squad where every single rower has qualified for the Olympic finals.

It was Katherine Grainger and Anna Watkins' day after all. Three previous silvers for Grainger and a bronze for Watkins were turned into gold on Eton-Dorney lake in the space of six and a half epic minutes.

London 2012 Day 8: Best Olympic regatta of all time for GB

Britain closed out the 2012 Olympic regatta with two golds and a silver on the final day of racing to bring their overall tally to four golds, two silvers and three bronzes - a best ever.

More in this section

Get the latest rowing news, tips, event info and updates straight to your inbox.